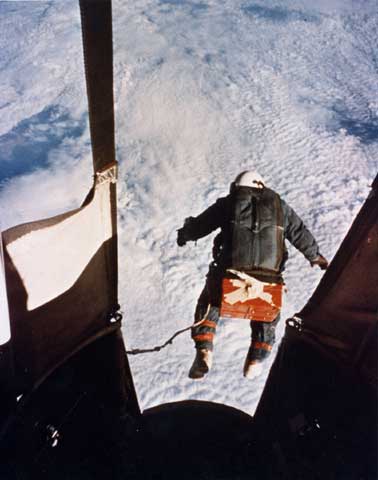 How come no-one wants to know what I saw?

The curve of the world was upon him now, the curve of the world: blue flecked with white and green, a curved slash sliding across the black panorama. Beneath him, the engine’s vibration slowed to grumble, then a murmur, as the rocket neared the zenith of its arc: nose drifting downwards, path flattening out.

The moment of truth was upon him: the tiny hiatus that marked the meridian of his flight. The silent pause before his single-minded, bellowing ascent collapsed into the spiral whistling of his tumble to earth. As always, it had come sooner than he expected; and he was momentarily irritated.

But then he reminded himself to count his blessings: he was a rocketboy, and that was enough. Craning his neck up, peering into the infinite dark, he patted the rocket with his free hand, spreading his gloved fingers across its taut titanium skin. It was a good ship, and he was lucky to ride it, no matter that the ride was so short.

The deep black was inviting, its stillness that of a familiar room at rest; but he would not be travelling there today. He forced himself to look back down, at the horizon as inching its way up the sky. Ahead of him, he could see nothing. Twisting, he looked over his shoulder: a constellation of supernaturally bright stars fanned the sky behind. He was leading the field.

He’d ranked some way behind the favourites for this leg of the race, so anyone who’d backed him to this first corner would probably win handsomely. (Below, he could just glimpse the red shell of a chute: engine trouble had no doubt struck out at least one of his competitors.) But he took little satisfaction in it: there was no skill in the climb, just a straight-up fistfight between throttle and gravity.

And he’d won that fight decisively before: back when space travel still needed men with square glasses to slide rules to send tin cans to the Moon. When space was still the high frontier, not a playground; when you needed the right stuff to ride in – not on – a rocket. When spacemen still gritted their teeth, rolled their sleeves up, and crew-cut their hair.

His own hair, beneath the helmet, was still cropped as short as it had been when he’d first stepped onto the dusty lunar surface. It made him look old, contrasted starkly with the pricey coiffures of his fresh-faced rivals; but it also made him look tough. Perhaps that was why everyone expected him to do well on the up-hills, overlooked him on the way down. Image counted in this game, even if you didn’t think you were playing.

Looking up, he could just see the Moon, aloof from the stars; looking down, the finger of Florida poking into the sea. He could have covered it up with one of his hands: eclipsed Miami and Orlando and Tampa and St Pete. Covered up the house and the car. The peeling paint on the door, the tangled weeds in the yard. Covered up his ex, his daughter. Down there, they were so far away, his daughter unreachable, untouchable. Up here, she lay in the palm of his hand.

The rocket’s nose was almost horizontal now; he fancied that he could hear the thin screech of air past his suit, though was impossible as yet. Soon enough, he would have to take the reins, guiding the rocket into its sequence of loops and arcs. Freefalling, hopeful as ever that this time he could win the judges’ hearts; but the only sure thing was the plunge, cold and alone, into the icy embrace of the ocean.

Bobbing in the sea, waiting for the waterbus to crawl round the route and pick him up: very different, he thought, to a flag-and-tickertape parade. The winner was always the first to be collected, prepped for interviews and medals; the losers, to add insult to injury, were last. There was always the sneaking fear that he might have played such an inconsequential part as to be forgotten altogether: he feared the indignity more than the danger.

Still, he thought, he was a rocketboy, and that was enough.

The rocket’s nose had tilted decisively downwards now, and he swore briefly as he realised he had missed the main chance. Already, the flotilla of sparks behind was fanning out, embarking on their balletic repertoire of pirouettes and sautés. Grace, rather than speed, took precedence in this phase of the race. But he had been clumsy, clumsy as usual.

He jerked hard on the reins – the sudden tilt would cost him points, he reflected – and started on the descent, taking his steed into a long, stretched arc across the ocean below. Now his attention was directed solely to the blue below, not the black above. The arc would give him momentum and space; perhaps enough to pull off a double bow on the return.

He waited for the sharp elbow of the move, vented a little smoke; then again as he came out of it. From the ground, on the scopes, it would seem a confident one-two: or so he hoped. Still very high: better to save the long trails until he got nearer the ground. He pulled left, then right, then threw his weight around the slim rocket until it flipped around nose-to-tail: the bow was almost tied, but not quite.

An outside loop, a barrel roll, a tailslide and a snap roll; a left tilt, a right tilt, a swoop and a flick. The ground was welling up now: in the seconds before he flicked to the north, he saw a town. Too large, now, to cover with his hand. Above, the black was almost eaten away, consumed by the brightening blue of the sky. Ahead, the final gate, the last checkpoint to run: the only timed downhill stop that counted for much.

He lined up with the gate; swapped art for velocity, put his head down. Now the air really was rushing, but only the sound touched him. And he could feel the blood rushing strong and red through his heart, feel his muscles tensing round the rocket’s reins; yet as the gate loomed large ahead, it was lanced by a spark that flared into a man on a ship. The race was lost; and the scores, too, would count against him.

But as he soared through the gate, streaked into the ocean, he remembered: he was a rocket man.  And that was enough. ##

5 thoughts on “King Of The Rocketmen”