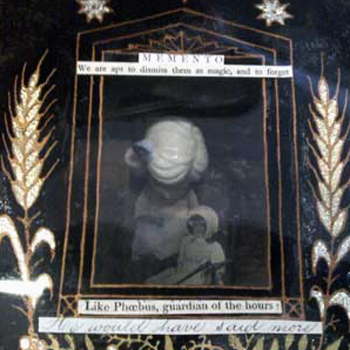 Hope is making a memory box.

It is hard work, now that she is dead.

But there are no stories, because the picture is of an utter stranger. Hope found it pressed between the leaves of a volume of Jonathan Swift’s poems, a volume she found in the abandoned house when they arrived. She has never even met the people who owned the house before them, has no idea if the girl in the picture shares a history with them.

But Hope has no stories of her own mother, or grandmother, or great-grandmother. All the mothers of her line died before she was born. That’s a tradition in itself, she supposes; she, too, died before her daughter could be born. But it is not one that she wishes to commemorate. So the picture will have to do, its imagined stories standing in for her own.

Once she would have rebelled at this pretence, proud of her foundling nature. But now she has grown used to having others tell her stories for her. She supposes that is what happens when you are dead, when you can no longer tell your stories for yourself. They talk, to her face, of how brave she was, how blameless. They talk, when they think she cannot hear, of how she has grown distant, and quiet, and strange.

And he, her husband; once, he told tall tales about her prodigious gifts; about her bountiful offerings of love, of sex, of company. Now, he only lists the evils that she has set upon him. He talks of imagined slights, of imaginary infidelities. The only story he does not tell is the truth. That story is not fit to be aired.

Angered, briefly, and surprised that she can still feel anger, she scribbles bitter words. Then, the flash of fury over, she reconsiders. On a fresh sheet of paper, she writes brief words of chastisement. She writes them in her best script, so that he will know that she they were well considered, not hastily wrought. She cuts them out, affixes them carefully to the lid of the box.

The box’s lid is lacquered, inlaid with pearlescent ears of wheat. Wheat for Demeter. Demeter, goddess of fertility. In marriage, as well as in the fields. Certainly Hope has not won Demeter’s favour. If she had, things would have been different. Perhaps then there would have been fewer breaches of marital contract, fewer stains on their sheets.

But perhaps the goddess will show mercy to her yet. After all, Demeter had a daughter who languished in the kingdom of the dead. Perhaps she will listen kindly to the sympathetic magic of the photograph of the pretend-mother. Perhaps she will return Hope to life. Perhaps once Hope has made the box, sealed it, offered it to Demeter, she will awake the next morning and arise again – like Apollo, like the sun – and turn to the day’s new work.

But Hope knows it is not to be. She slides the lid of the box open again, puts in the doll’s head. Its cool whiteness is smooth below her fingertips, and for a moment she closes her eyes and feels its weight, reluctant to let it go. She does not remember where the head came from; only that she has owned it since she was very young.

She remembers admiring the frozen set of its perfect hair; the pale blue bow peeking out at one side. It seemed so sophisticated, so adult. This, she thought, was what it was to be an adult, a woman. A perfect, immaculate, flawless figure.

Now she opens her eyes and looks at it again, and she realises it is nothing of the sort. It is a child’s head, and it has the perfection that only a child’s face – pure, uncontaminated by life’s harsh truths – can display. The eternal perfection of a child who will never grow old. She places it carefully, gently in the box. There, it can rest, undisturbed, forever.

One more item. This one she picks up without looking, drops it hastily in corner of the box. The instruments of her repair, still and eternally incomplete: it picks and scratches and itches at her every day. Her hand drops, almost without her knowing it, to where the ragged scar runs across her abdomen: the scar that saved her life, and caused her death, all in one and the same instant. The unholy wound through which her daughter was born, and died, in the moment of her first and last breath.

Hope’s eyes film over with tears and her breath grows ragged. Her stuttering fingers push back the lid of the box. The memories, sealed within, grow still and fixed.

But Hope, outside, finds no release.

How can it hurt so much when you are already dead? ##

Inspired by The Cotard Delusion, an artwork made by Amanda Schiff and exhibited at the Grant Museum of Zoology, London from February 15th- June 11th 2010

3 thoughts on “Memories of Hope”