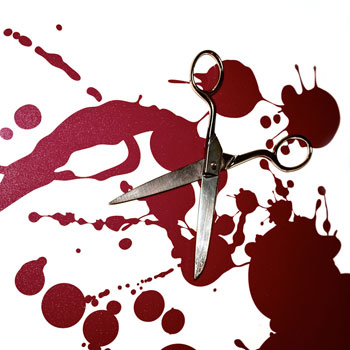 There’s never a pair around when you need them.
Five stories of lives, cut short.

The sheet of wrapping paper was too big for the parcel.

“Oh sweet Jesus, what are we to do?” said Mother.

“I don’t know, Mother, but we must be brave,” said Father.

“Rapunzel, Rapunzel, let down your hair!” came the voice.

Rapunzel’s heart beat fast as she lowered her tresses out of the window.

There was a sharp tug as the prince started to climb, and Rapunzel almost cried out.

“Gently, my love,” she called.

“I’ll give you gently,” said the voice, and this time it cackled horribly.

It was not the prince at all, but the crone, who had stolen his voice.

He was far off the trail, which few people used in any case.

There was no way to free his hand from under the rock.

In his desperation, he had pried and scrabbled and scratched at the rock with his free hand, hoping desperately that he might be able to move it, even if only an inch.

Now his nails were in a terrible state.

“Here, sire,” said a trusty aide, holding the stallion’s bit with one hand and taking the crown with the other.

No sooner had the former king mounted the horse than it bolted.

He tried to leap free of the saddle, but realised his garments had become hopelessly entangled in the reins.

The horse was heading full-tilt for the enemy.

But all he had left to give was the horse.

And nobody wanted it.

The fate of the human race hung in the balance.

And the Earth died screaming. ##

3 thoughts on “Running Without Scissors”