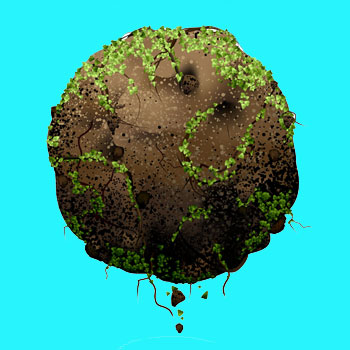 Chicken Little was a gutless wonder.

From up here, high in the air, Dinant looks sleepy. Peaceful. Idyllic.

I wonder, as I release a little more helium into my balloon, if Pompeii might have looked much the same way as it dozed in the shadow of Vesuvius. On another day, Dinanters would be walking to work, shopping for groceries, taking their children to school. Touring fora and agora, much as the ancient Pompeians must have done. Working their fields, harvesting the fruit of their rich, dark soil. Grapes for them, mushrooms for us.

The sky is blue up here, above the stones. I remember it from childhood trips to the country, to the seaside. For a moment, I am panicked by the sensation of weightlessness, of the feeling that there is nothing between me and infinity. But my fear subsides as I wonder at how astonishingly distant and insubstantial the clouds seem. And I wonder what it must be like to always stand up, straight and tall, under this open sky. I wonder if I could grow accustomed to living that way.

Certainly, few who venture into Dinant grow accustomed to living our way. Our town is small and remote, its peculiar condition little appreciated in the world beyond our valley. New visitors, arriving unawares – perhaps looking for a bed for the night after hiking over the surrounding hills – are likely first to remark upon the sudden fading of the light as they pick their way through our narrow streets.

Next they notice the extra-ordinary hush that suffuses our town, the nervous disapproval that meets their attempts at banter. Usually they will fall silent to confirm the evidence of their ears. There is no chatter or clatter in Dinant; no raised voices or childrens’ clamour. There are no donkeys, dogs or cockerels. No songs; no music.

And then they finally look up, sensing solidity behind the shadows that dapple the streets of the town and the slopes of the valley. Some put their arms over their heads – as if that would make any difference – while others cry out and are hurriedly silenced. Some simply faint away; others flee at the first opportunity, perched precariously on the back of taxicycles, cringeing all the way to the nearest town boundary. Still others feign nonchalance, perhaps laugh unconvincingly. A very few keep up the pretence until they forget they are pretending at all.

These last are the ones who win the Dinanters’ congratulations; conversely, we laugh at those who cannot bring themselves to repudiate the evidence of their senses and reach an accomodation with the billions of pounds of rock floating in the sky above our town. Dinanters make a virtue out of denial. Thomas Jefferson, on hearing reports of meteorites crashing to earth, retorted: “I would rather believe that two Yankee professors would lie than that stones would fall from the sky.” We Dinanters applaud his attitude. We prefer to believe the lie. And the stones do not fall from the sky.

I would like to say that I am regarded as a harmless eccentric in Dinant, but that would be less than truthful. Many of my townsmen regard me as a lunatic, in a sense that’s quite faithful to the original meaning of that word. While most of them prefer to gaze steadfastly at the ground, hunched over in devoted contemplation of the cobbles, I have always been more interested in the more massive stones above.

At first, I kept this interest to myself – like most of Dinant’s children, I was given to understand that such curiosity was somewhat indecent. But as time went on, I grew bolder and more open about my interest, shrugging off the disapproval of my neighbours. And after my parents had passed away, I used part of their legacy to have a small refracting telescope constructed to my specifications. That has made it possible for me to observe the stones in unprecedented detail.

Through the telescope’s eyepiece, I have closely observed the stones’ motions, though I have yet to fully decipher their gyrations and revolutions. I have established that some of the littler stones orbit their greater cousins – a fact hitherto unsuspected by my kinsfolk, who were not grateful for the revelation of this fact. I have watched them occasionally graze each other, and seen the resulting scree hail down upon the town below. (Like most Dinanters, my own head and hands bear the scars of such showers.) And on two occasions, I have seen one of the stones, jostled too hard by another, lose its equilibrium and plummet to earth.

On both occasions, the cause was clear – at least from my vantage point. The first time, it was the clang of a falling saucepan. The second, the crack of a rifle, accidentally and unlawfully discharged within the town borders. Accidents happen, even among careful folk like the Dinanters. Every now and again, someone will be startled or provoked into breaking his self-imposed vow of silence, letting out a cry and prompting a rock to fall. Every now and again the sound of a breaking plate will be followed in short order by the sound of a breaking house. And every now and again, a mother will fail to soothe her baby’s cries in time.

I feed a little more gas into the balloon and cautiously pull at its rigging until it starts drifting towards the mightiest of the stones. The balloon consumed most of the remainder of my parents’ legacy. I try not to imagine what they would think, if they had lived to see it. An indulgence – a wasteful, dangerous indulgence – rather than a house or a dowry. But if they could see what I see now… the titanic boulder’s pitted face turning almost imperceptibly beneath me, barely faster than a clock’s hour hand, its edge furred by the spindly pine trees. There is no breeze that I can feel: the balloon is moving with the wind. But I’m almost sure I can smell resin in the air.

I am sure the streets will be empty, abandoned, but I look nonetheless for children. It is a reflex, an instinct; in Dinant, a child alone is a child in danger. Our children are subdued and pallid, stooped and timid. Silence and caution are the stuff of their whispered nursery rhymes and playground games, their watchwords from the cradle to the grave – a journey conducted all too swiftly by all too many. Children are children, after all; they sometimes forget themselves in their enthusiasm.

I swivel my telescope to examine the massive rock at closer quarters, but find myself looking at Dinant again. The buildings are crumbling because no-one dares mix mortar or swing a hammer; and they are strung together by a patchy net of pipes, ropes and cables that no-one can bury for fear of the crack of a pickaxe or the clang of a shovel. To me, it no longer looks as if it is sleepy. It looks as if it is dying.

Children are also adaptable, however, and Dinant’s have found ways to circumvent and even exploit their situation. They speak in whispers and signs; they skip without chanting and smile without laughing. They play games peculiar to their circumstances. The hunted dart from the security of one umbral shadow to another as the lonely hunter stumbles after them through weak sunlight. They even play rock-paper-scissors: but in their compellingly truthful version, as fascinating as it is futile, the rock always wins.

I am very close to the behemoth now, perhaps only fifty feet away from the tips of its tallest pines. I check for somewhere to touch down. There is a clearing a little distance to the north, not quite in line with the balloon’s trajectory. I carefully start pulling at the guy ropes, hoping to catch a cross-draft and change direction. It is difficult and tiring work, all the more so because it cannot be hurried. Beads of sweat turn into chilly rivulets as they roll down my forehead and into my eyes.

The children are braver than their elders, more accepting of the reality of the situation. We talk as though it will never happen to us or our loved ones; but our actions tell a different story. Near misses draw a impenetrable, suffocating hush over neighbourhoods. Stricken animals are buried wordlessly, shamefully. Thunder in the night makes us cower and huddle and pray we are not among the morning’s dead.

I brace for touchdown, wondering if the impact of the balloon could itself be enough to send the boulder crashing to earth. Surely not: I have even seen the rock brush off stones far larger than my balloon. But I nonetheless grit my teeth, hold my breath, as the ground rushes up towards me, the basket first grazing the gravel of the rock’s surface, before it tips forward, bumps off the ground, bounces, then hits hard and definitively, the deflating sac of the balloon dragging it along pell-mell over the ground until it finally scrapes to a halt.

The rock is indifferent. I release my breath.

Death turns neighbour against neighbour. Those who have lost their loved ones envy those who have not. Irrational jealousies spring up. Superstitions take hold. Unfortunates whisper calumnies about their luckier kinsfolk. The God-fearing wonder why their prayers have gone unanswered. Pray harder, the clerics say.

I crawl from the basket, my head smarting where it struck the side of the basket in the stand during the descent. In the clearing, gazing at the trees around me. I could be in any Alpine forest. I am momentarily exultant at my triumph; I only wish that there was time to explore, to take stories of the wonders back to the world below. But I am here on a mission, and my time is limited. I must act quickly, before morning service is over and my fellow Dinanters emerge from the church. I start unpacking my equipment – quickly, but nonetheless carefully, gently.

Prayer: that is our only answer to the threat we live with, night and day. Prayer, ignorance and fear. Well, perhaps prayer will protect them now. By now, every man, woman and child will be mouthing the litanies silently, or perhaps tracing the lesson with their index fingers. Now, it is up to God – if He exists – to decide if they will all live or all die. Whether He extends a protective hand to shield the church; or a vengeful one to crush it. But whatever fate befalls them, it will befall them together.

The people of Pompeii went about their business as though sleeping, until they died in their sleep. All that was theirs was taken from them, smashed and buried and burned beyond any hope of repair.

We will not suffer the same fate.

We will no longer labour under the sky’s oppression.

I take a last look at the empty streets below.