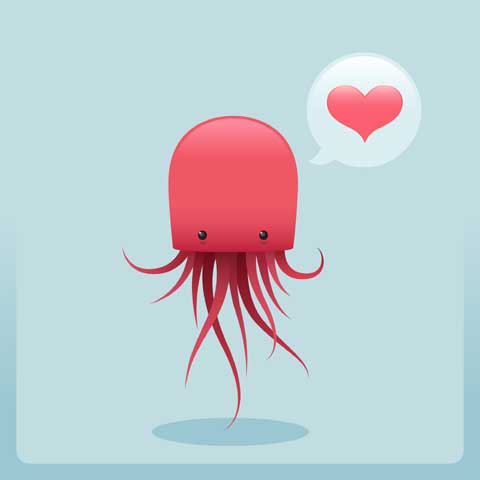 Parting is such sweet sorrow.

“It’s been a while,” my former mollusc said to me. He was looking well, I was annoyed to note. Better than me: I’d put on a bit of flab and was feeling drab: but he still had his clear colours, his proud beak, his sinewy tentacles.

I wondered momentarily if his ink still tasted like the open ocean. Then I cursed myself inwardly for even thinking about it.

“Yes, it has,” I replied. “How have you been?” Polite but distant, I told myself. I hate running into exes. Particularly at work. But it had been inevitable that our paths would cross at some point. It’s a small ocean, after all. Smaller still when you both work in high-end calamari marketing. If there was one place I was bound to run into him, it was at the annual offshore conference. (Technically, all our business was conducted offshore, of course, but you know what management types are like for jargon.)

Try as I might, I couldn’t help but feel some residual affection for him. It remained true that I’d outgrown him. But it was equally true that he’d played a big part in making me who I was today. And he was the least embarrassing of my exes. I still cringe to think about some of his predecessors, particularly. Thoughtless, inarticulate and irresponsible: it was a minor miracle that I’d made it out of adolescence without losing an arm or three.

“Not bad, not bad,” he said with unconvincing casualness. “I’ll have to tell you all about it. Actually, do you fancy a drink?”

“Oh, come on,” he said, smelling slightly annoyed. “Can’t we at least be civilised about this?”

“I tried to be civilised about it, remember?” I snapped, my flanks flaring red despite myself. And blowing any remaining chance that this encounter would pass unnoticed by my colleagues. I could smell half the department nearby — including, I was horrified to realise, my boss, my boss’ boss, and my boss’ boss’ boss. I could practically feel their eyestalks protruding in my direction. “It was you that got all hysterical.”

“Well, I was the one that was being dumped, wasn’t I?” One of the ways in which we were similar was that neither of us had ever been much good at hiding our emotions. And one of the ways that we were different was that he always tried to; I never did. His flanks were as ablaze with fiery colour as mine, despite his attempt to conceal them with his pseudopods. I tried not to notice that it looked rather good on him.

“Time to move on, you said,” he continued bitterly. “I was stifling you, apparently. You needed your space.” Were we just going to recap the clichés we’d spawned during our break-up, I wondered? Or would we get down to good old-fashioned character assassination in due course? Maybe some shouting: that’d impress the octopodes from Head Office.

Despite his tone, he’d actually been more worried about surviving on his own than about losing me. And he’d had a point: it’d taken me a long time to accept that it was time to go our separate ways, and even longer to suggest it to him. He’d taken it well initially, and it’d all been pretty amicable to start with. But then came the monosyllabic conversations, the heated arguments, the cold negotiations over the books, the records, the furniture, the exoskeleton, the nervous system…

Now, he just looked withdrawn and hurt, his mantle pulsing with dolorous green-brown rings. I began to worry that he might actually start crying. Or disappear into the background as his camouflage kicked in. I hated to make him fade out this way – but actually, I rather wished I could disappear myself, what with all the Head Office pseudopods pointing in our direction.

“C’mon,” I said gently, reaching out to tap his carapace. “How about that drink? For old times’ sake. A martini? With zooplankton and bladderwrack on the side?”

He clacked his beak sullenly. But there was a hopeful tang in his odour.

I felt a bit better once we were back in the bar, ensconced in a semi-circular rock booth. The decor was banal, the ambience lousy and the lighting so bright you could barely see yourself think. And the drinks were weak. That’s hotel bars for you, I suppose. But then again, I was more interested in the quantity of the booze than its quality; the lilting tidal motion reminded me of my carefree barnacle days; and the company… Well, I was warming to the company despite myself.

We’d been silent for a few moments — a companionable silence, like in the old days — when he gave an abrupt laugh. “Can I ask you something?” he said. “Did you leave because… because you found someone else? You can tell me, I promise I won’t get angry.”

I paused, wondering what answer he was hoping for, before opting for honesty. “No,” I said, “I just thought it really was time we went our separate ways.”

“Yes, really. How could I possibly have been carrying on with anyone else without you knowing about it?”

He visibly deflated, flushed pale blue and then an embarrassed, sickly green. “I suppose I thought you might have developed some independent motility and didn’t tell me about it. Sneaking around while I was asleep, maybe.”

“Don’t be daft,” I said, slapping him gently with a tentacle to show I was teasing. “I couldn’t have moved an inch without you. Until… well, until the end.”

“I’d rather hoped there was someone else,” he said. “Was I really so difficult to live with?”

“That’s even more depressing,” he said, “the idea that you just didn’t need me any more. It makes me feel completely redundant.”

I was starting to feel unsympathetic again. “Well, that’s just how things are, I’m afraid.”

“I wonder what it’d be like to be a squid,” he said. “You know, with one continuous lifecycle. They just develop from one stage to another. Larva to instar to adult.”

“Sound bloody weird to me,” I said, dipping my beak further into my drink. Avoiding his eyes.

“Perhaps it’s better that way,” he continued. “No exes hanging around, wondering if there’s anything left to live for.”

“That’s easy for you to say,” he said. Then a half-smile crossed his maw and he flushed a satisfied pink. “For the moment.”

Something about the way he said this chilled my already cold blood still further.

He laughed, and it was not a kind laugh. A dark black stripe raced over his body from tail to tentacles. “Oh, none of us think our time will come,” he said. “But honestly, do you really think you’re the last in line?”

“Well -” I started. Then I stopped. Remembered my feeling that I’d put on a bit of weight. I touched my tentacle to my side. It probably was just a bit of flab. But then again… weren’t you supposed to know if you were budding?

He looked at me, raised his glass in a half-rueful, half-amused style.

“Drink up,” he said, “and perhaps we’d better go get some dinner. After all, you’re eating for two now.” ##