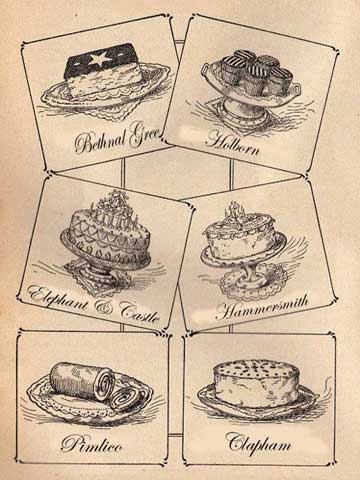 Address given by Lucinda Graves to the Royal Society of Ethnogastronomes upon the publication of the first edition, 1928.

Even the most casual of gastronomes cannot fail to have noticed that we live in a veritable Cockaigne. In every corner of our green and pleasant land we find delicacies and specialties of rare and beauteous kind. Our cooks do not ostentatiously seek out novelty (or, dare I say it? notoriety) as is the habit of les chefs of the Continent. Our national temperament is more phlegmatic than that of our Gallic cousins. We prize tradition over invention: once we have fastened onto an idea, we stick with it regardless of whatever modish winds blow across the Channel.

For this reason, every town and hamlet in Britain, be it ever so humble, can boast a signature dish whose recipe, once perfected, has been preserved for centuries, or even more. The names of some of these dishes will be immediately familiar to anyone who has ever put fork to plate in earnest: Eccles cake; Welsh rarebit; Cumberland sausage; Bakewell tart, to cite just a few.

Others are more obscure — for the most part, thankfully so. The British are reluctant to blow trumpets for their own cuisine; we prefer to let culinary explorers chart their own courses to our finest and rarest provender. Most never do, which perhaps accounts for the poor reputation of British cuisine amongst bison-chomping Colonials and frog-munching Continentals alike. Perhaps this is just as well, since Texan appetites would no doubt make short work of the modest portions preferred here in the Old World!

But I digress. My point is that even as our reticence preserves the sanctity of our native dishes, it at the same time deprives them of security. Even the most celebrated of dishes may, over time, see its fame dwindle as folk move away and fancies change. Just as Manx or Cornish are today spoken by only a handful of solitary, aging yokels and will pass away with them, so many of our islands’ dishes can only be prepared by a single cook here, a brace of bakers there. The roll-call of the lost will no doubt be familiar to such a distinguished audience as are present here tonight; and I will not sadden your hearts anew by reciting it now.

In short, the forgetfulness engendered by our reluctance to advertise British fare makes it possible for an entire corpus of culinary achievement to be neglected and ultimately forgotten. It is the rediscovery of one such corpus – a rediscovery of almost unimaginable significance – that I am here to announce today.

Let us return to the Bakewell tart, perhaps the most famous of British puddings and certainly the Peak District’s finest treat for the sweet of tooth, quite overshadowing the Matlock Toffee and the Hathersage Bun. It is common knowledge that the recipe for this almond-scented confection is a secret guarded closely by the members of just one extended Derbyshire clan. No outsider has ever uncovered the means by which this exquisite pastry is made, or so we are told; such quests have proven at best futile and at worst dangerous (as Conan Doyle described, in his traditionally obliquely style, in his celebrated memoir of the Blue John Gap).

But I suspected that perhaps one man might give the lie to this article of faith.

I expect many of my readers will already be familiar with the exploits of my great-uncle, Lucullus Graves: aesthete, actor, writer, philosopher and mystic: but above all, collector of rare recipes, ingredients and condiments. Lucullus’ work as an ethnogastronomist has been covered exhaustively elsewhere, and will no doubt be familiar to this company, so I will note only briefly a few of his more celebrated adventures here.

Lucullus made his name with his pioneering survey of the food of the Amerinds, and thereafter sealed his reputation by becoming the first white man to break bread with the Esquimaux (so to speak; the Esquimaux, lacking grain, are more wont to break dehydrated seal-flipper, as my great-uncle noted with his usual punctilious eye for detail). His burning passion for rare eating drove him to embark on further adventures in every quarter of the globe, from the Andes to the Yangtse, and with every excursion came greater fame — until that last doomed journey to Antarctica. “Fortune follows food, and food follows foot,” he was fond of saying; but sad to relate, the veruity of this maxim was finally exhausted in that southern Thule.

Yet of all Lucullus’ discoveries, perhaps the greatest was the one I am about to share with you now. While looking through some family papers, I came across a fragmentary reference scratched hastily onto paper both stained and torn: “the recipe … lost for so long … of that Village’s dessert. I have travelled the world seeking Perfection; who would have thought it lurked so close to home?” The handwriting was that of Lucullus.

My thoughts immediately leapt to Bakewell. Had Lucullus managed truly gone where no other gastronaut had dared? Feverishly, I began a search of his private papers. So prodigious were my great-uncle’s writings that not even a tenth have yet been properly examined. I am no scholar, but I hoped I would recognize the value of anything I chanced upon.

And so I did. Imagine my excitement when I found a piece of notepaper which bore a recipe for an unfamiliar confection — one of whose primary ingredients was almond. Surely this was it! Lucullus had, indeed, loosened the lips of the bakers of Bakewell!

But the location inscribed at the top of the page did not read Bakewell. It read Pimlico.

Puzzled, I ransacked the manila folder inside which the rogue recipe had rested for all this years. I quickly found many more pages, written in the same hand and ink, on the same paper — they had no doubt come loose from some ancestral notebook. Flicking though them, my initial disappointment turned into mounting excitement as I realised that here in my hands was Lucullus’ greatest — and unpublished, undreamt of! — achievement: a near-comprehensive compendium of the lost puddings of London.

[Newspaper reports suggest that the meeting was plunged in noisy disarray at this point, with order being restored only after several minutes of commotion had passed.] 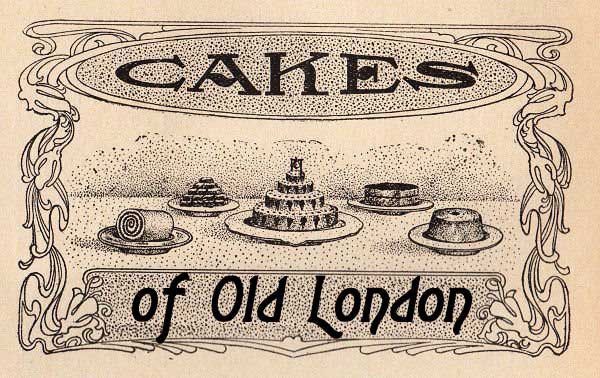 And yet it is true! Let me explain. London, as has been noted, is a city composed mostly of villages: from Hampstead in the north to Stockwell in the South; from Hammersmith in the West to Bethnal Green in the East. The evidence of these rural origins is readily apparent to anyone who takes the time to look for it. Each of London’s districts retains its own distinctive character, inherited from the primal village from which it sprang. This heritage is manifest in its architectural vernacular; in the naming of its streets; in the local peculiarities of its dialect and lore; and even in the physiognomies of its residents.

So London’s villages, unlike its rivers, cannot truly be said to be lost: no settlement has been interred as the Fleet or Tyburn have. Their rustic names and traditions live on in today’s teeming metropolis — save in one key respect. Their culinary traditions. The native foods of London’s founding towns had been all but completely forgotten, their very existence unsuspected — save by one man.

Lucullus’ genius was not that he intuited the existence of these forgotten dishes — that is an entirely logical deduction if one stops to consider the facts I have laid out, though it must be said that none had thought to do so prior to my great-uncle. No, his brilliance lay in his dogged, meticulous reconstruction of the lost recipes from tiny scraps of epicureana and etymologia. To this information, he added inspiration; his papers are only just beginning to give up his methods; much more study will be needed.

It must be admitted that this process included a considerable amount of inference and extrapolation, the extent of which is not and may never be known. For this reason, I am sure there will be skeptics among you. I welcome debate, but I invite you, before leaping to judgment, to test your skepticism against the eloquent arguments made by the dishes themselves. I am confident that you will appreciate the authenticity of the dishes Lucullus uncovered.

No-one who has tasted them will deny that they fit perfectly into voids in our native cuisine, voids so obvious and yet for so long overlooked. The chocolate discus of Clapham, the tobacco trifle of Elephant and Castle, the flaming pink wafers of Islington, the great dome of Stepney Green — these may seem bizarre, but like those outlandish half-lizard, half-bird skeletons that tell us of the deep antediluvian past, they are the missing links that make the chain whole.

Here, then, are all the dishes of London’s culinary prehistory, laid out in full for all to savour and even to recreate. Why my great-uncle never published this work, which would surely have been his magnum opus, I do not know. Perhaps he was not certain he had completed the task. Perhaps his ill-fated Antarctic jaunt made a permanent interruption to his ambitions. Whatever the reason, it is my pleasure and privilege to present his discoveries to you here in this long-awaited volume:

THE LOST PUDDINGS OF LONDON.

5 thoughts on “The Lost Puddings Of London”