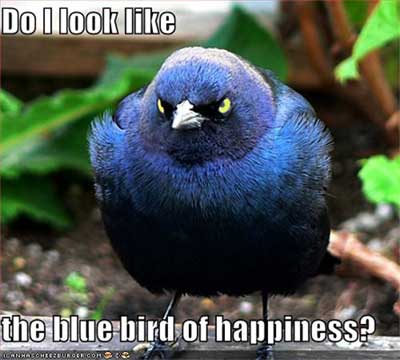 Why do I want to leave?

Well, let me explain. No, tell you what, just listen to this.

Didn’t catch that? Okay, rewind it and play it again.

Still no good? Well, do it again but hold down the play and rewind buttons at the same time. That’s a little trick the guys in IT showed me.

“Hey, Bob here, just wanted to touch base with you on the TPS report situation. Murray says he hasn’t seen any TPS coming down from fourth for at least two weeks, maybe three. I’d really like to get this sorted out before the holidays, otherwise it’s going to have to go into this quarter’s op stats and then we’ll have no quota for next month’s –“

What the bloody hell am I supposed to make of that, eh? You tell me.

I hate working with flits. Don’t get me wrong, I’m not prejudiced. Well, all right, maybe I am, but you know, they give me the creeps with all that fidgeting. Little beady eyes, heads always twitching — give me the creeps, they do. They’re like little birds, aren’t they? Like sparrows. When we still had sparrows.

I’m sure they’re perfectly nice people if you get to know them, but you never get the chance, do you? They keep themselves to themselves. Suppose you’re not supposed to say that any more, but that’s the truth, isn’t it?

Take Tim. Works at the desk next to mine. Nice enough guy, I’m sure; but I don’t think I’ve ever had a conversation with him that lasted more than twenty seconds. Twenty seconds of my time, that is. He probably thinks I’m a right nightmare: I’m probably that bloke who corners him in the kitchen and bangs on forever about some crap or other. But it’s not too much to ask for a bit of patience and courtesy is it? Take those bloody brainplugs out for a minute to talk to another human being? Won’t give you the time of day, bloody flits, unless you’re plugged into whatever the flavour of the month is. I’m sure he once actually went to the photocopier and back while I was still trying to play back what he’d said.

No, you’re right, it’s not a new thing. But it didn’t used to be like this, did it? It was just a few smart drugs to get ahead, wasn’t it, to hit your deadlines? Get everything finished up before the weekend. But it didn’t stop you having a conversation with them. Some of my best friends were flits, back then. I did some myself, when I was younger. I’d probably do them now, too, if you could still get the pills. Certainly could use a bit of edge, ’cause I’m not getting any younger, am I?

But no, it’s all brainplugs now. Brainplugs. Heh. Too right. If you ask me they plug up your brain. Can’t get through to anyone with ’em in, can you? Kids now don’t know any different. Never turn the damn things off. Apparently some of the new ones you can’t turn off anyway. Bloody stupid if you ask me: it’s not natural, is it? They’re all gonna burn out, get Alzheimer’s. You’d think they’d have learned by now, but kids think they’re going to live forever, don’t they. It’s like with smoking. Though I suppose that’s too slow for flits.

Yeah, sorry, I’ve got off the subject. Bob. Tweet bloody tweet. I could care less about the TPS reports — no-one gives a toss about them except headquarters. And it’s not like they do anything with them, they just file them somewhere. But someone’s got to compile them, and it ended up being muggins here. Not even meant to be my job. I just got lumbered with them when they found out  that the flit who was supposed to be taking care of them had made a dog’s breakfast of it. No attention to detail, that’s the problem with your flits. They’re fast, I grant you, but no attention to detail. And there’s a lot of detail to pay attention to on a TPS report.

So that’s why I’ve got stuck with processing them. A steady hand, Bob calls me. Too steady for my own good, maybe. Perhaps that’s why I’ve been passed over for promotion so many times. No-one values an honest day’s work any more. It’s all about flash and dash, about getting things done quickly, not properly. The flits get all the best jobs around here.

Oh come on, that’s how it is, everyone knows that. Don’t tell me about policy, I’ve read the policy, I even wrote some of it when I was in the union. When we still had a union. No discrimination against staff who don’t want to get neuroenhanced, I know all that. But you should come down and see what it’s like in the real world, mate.  People like Bob, they don’t care. He’s supposed to spend at least half of his work-week at normal speed, right, so that me and the other naturals can talk to him properly? Well does he heck. You ask me, it’s mighty convenient that his downtime — that’s what he calls it, not me — is always when he’s away from the office. Working from home, sales calls, executive bloody retreats — that’s when he’s running on my clock. Supposedly. When I can’t reach him. Whenever he’s in the office, he’s always doing a flit.

Anyway, I’ve had enough of it, frankly. I’m not getting any younger, and I’ve had enough bloody TPS reports to last me a lifetime. So that’s why I’m asking for voluntary redundancy. I know there’s going to have to be some cuts made downstairs — yeah, word gets round, doesn’t it? — and I figured I’d probably be one of them anyway. Even if I was to be kept on, I don’t suppose it could last all that long before it was just me and a couple of other norms down in the basement.

But I have complained! Frankly, the grievance procedure isn’t worth the paper it’s printed on. Everyone in senior management — no offence, right — but everyone in senior management’s in it together, aren’t they? You’re all flitting about together. I mean, you just flitted now to answer a call, didn’t you? Yeah, I noticed. No, it’s all right. Don’t bother apologising, I’m used to it. And I’m leaving anyway. You can do what you like. No skin off my nose.

Sorry, I didn’t mean to give you a hard time. I know you’re just doing your job. It’s not you, is it? Or me. It’s the system that’s wrong.

Is that everything you need, then? Okay, good.

No, no, I’m not going to look for something new right away. I’m going to take some time off, go travelling. I’ve never been to South America or Australia, and I’d like to see more of China too. So I’ll need a couple of weeks to do that. Maybe a month if I decide to hang out somewhere for a while.

Rushed? Well, yes, maybe, but I’m not going to do it in real time, am I? You must be joking.

Soon as I’m out of here, I’m going down to the gym.

Gonna get myself flit. ##