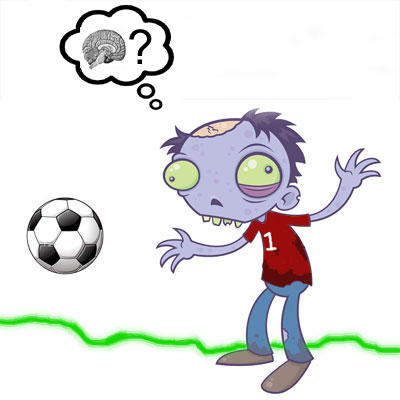 You’re not singing any more.

It was a late tackle even by the standards of zombie football, where players frequently challenged each other for possession of the ball several minutes after it had been hoofed away. And a dangerous one, to boot: Fernando had bitten deep into Fonseca’s calf and was gnawing avidly at it. A little longer and Fonseca would be rendered unipedal: and then he’d be out for at least the rest of the season.

But to the dismay of the last living man on earth, the ref did not appear to have noticed. He leapt to his feet, indignant.

But the ref continued to shamble absent-mindedly towards the touchline with his right hand to his mouth. He appeared to be eating his own fingers.

“Oy! Ref! You blind, or what?” the last man on earth bellowed at the oblivious black-clad figure on the pitch below. This proved equally unsuccessful at drawing the ref’s attention. It was quite possible, in fact, that he was blind. He had certainly taken a light-touch approach in his stewardship of the game so far. But the last man on earth nonetheless found himself compelled to keep up the barracking for the sake of good form. “THE REF NEEDS –”

He tailed off, uncomfortably aware that he had succeeded in getting his fellow fans to take their feet, although few of them gave much evidence of understanding why they were there. “Brainssss?” hazarded the particularly ripe gentleman standing next him, his mouth agape in a cheery, if disconcertingly incomplete, rictus.

Perhaps it would be unwise to attract further attention. So the last man on earth nodded slow affirmation at his mandibularly-challenged neighbour and then eased himself gingerly back into his plastic bucket seat. Some of his fellow fans were still standing in befuddlement; others had started milling impractically in the narrow aisles between the seats. His neighbour on the other side appeared to be having some difficulty locating his seat. That was understandable, given that his head had been sliced open like a hard-boiled egg just above the level of his eyebrows.

The last man on earth suspected that he could actually have done pretty much anything he wanted without drawing the deadheads’ ire. Certainly he had proven uniquely unattractive to their hardly discriminating tastes. (Doubly unique, in fact, given that he seemed also to be freakishly immune to the condition that had wiped out everyone else on earth.)

His girlfriend had once, during a particularly bitter exchange, accused him of being dead inside: apparently she had been more accurate than she could have possibly imagined. Of course, she was unambiguously deader than he was now, emotionally or otherwise. Initially, he had hoped their newfound emotional compatibility would paradoxically revitalise their relationship; but their differences had proven irreconcilable. Once a football widow, always a football widow. Mind you, could she really be a widow if she was already dead? For that matter, was he a widower?

His musing was interrupted by a mild surge of what passed for excitement among the Mouldy Army – to wit, a low groan, an almost frozen Mexican wave of turning heads and some sporadic twitching of limbs. While all eyes had been on Fonseca and Fernando – who now appeared to be trying to resolve their differences by disembowelling each other – Calvados, the Blues’ fleet-footed midfielder, had picked up the errant ball and taken it deep into the Reds’ half, his extraordinary turn of pace taking him past the hapless Red defenders in just three minutes.

It wasn’t only Calvados’ speed that made him such a formidable opponent, but his swift thinking: he always seemed to be one step ahead of the other team – which, to be fair, was relatively easy given how much time they spent wandering around more or less randomly. A case in point: Petrie, the Reds’ big centre back, had started marking one of the linesmen instead of homing in on Calvados. The linesman was eyeing Petrie nervously, and for good reason: the big man had only just returned to the field after a three-match ban for eating two spectators during the qualifiers.

That left the way open for Calvados to pass the ball through the Reds’ tattered back line; his strike was marred only be the fact that his foot fell off as it hit the ball. But it had the desired effect: the ball soared for twelve or more feet before splashing down in the mud and rolling gently to the feet of the Blues’ centre-forward Gerard, who by happy chance found himself with no-one but the Red goalie between him and the back of the net.

It took Gerard a few moments to work out what to do next – during which time the nearest of the Red defenders wandered tantalisingly nearby before losing focus and setting off in pursuit of one of his team-mates. Another of the Red defenders started to show interest, his attention perhaps snagged by the neat snake of pink intestine that lay coiled on the ground near Gerard’s feet.

But it was too little, too late. Gerard prodded the ball experimentally with a foot, then grunted, prodded it again – harder this time. The ball rolled forward, hesitated for a moment atop a tiny tumulus of grass before rocking over it and dribbling decisively across the line. The Red goalie was caught entirely by surprise, occupied as he was with turning a stray pigeon into a handful of bloodied feathers.

There were thirty seconds of silence. Then the Blue stands erupted – slowly, rather like toothpaste extruding unexpectedly from a tube. And the chanting went up.

The last man on earth was consumed with despair. “Ref! Ref!” he shouted once more. “REF!” he bawled. But even if the ref had been able to hear him over the groaning roar of the crowd, his effort would still have been in vain.

Because there was no one else left who had the slightest hope of understanding the offside rule. ##

2 thoughts on “Grey Is The Colour”