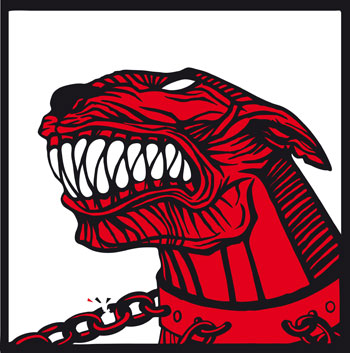 Biting the hand that feeds.

We were so worried about the robots that we didn’t stop to think about the dogs.

It was obvious, with the benefit of hindsight. We thought we were just giving them a leg up; we didn’t realise until too late that we’d actually given them a ladder.

Even we realised, we still didn’t see the danger. After all, dogs can’t climb ladders.

They’ll never become as smart as us, the scientists had said.

But they didn’t need to be. They only needed to be smart enough.

After all, they were faster than us, stronger than us, fiercer than us. Their senses were sharper, their reflexes quicker. And unlike us, they’ve never forgotten the lessons of the pack. We’d become an individualised, undisciplined rabble: but a hundred thousand generations of intensive breeding had only strengthened their loyalty, obedience and co-operation. Dogs don’t waver, or question authority, or hesitate. They work as a pack, and they get the job done.

We’d been worrying about super-intelligent computers, about the Singularity. But at least you can pull the plug on a machine. All the culling in the world had barely dented the numbers of stray dogs sniffing around garbage heaps from Shanghai to Nairobi to Lima. And by the time we noticed that the yowling and scratching had stopped, it was too late. The smartdogs were everywhere. Lab genes had got out and into the wild. And then they started culling us.

It was messy at first. A lot of blood was spilled before we understood what they wanted. As it turned out, their desires weren’t so different to ours. That shouldn’t have been surprising: after all, they’d co-evolved with us. We were still partners, our symbiosis intact – strengthened, in fact, by our genetic tinkering. Only our roles had been reversed.

Wine, women and song: that was pretty much it. They still need humans to make the wine – the complexities of the vintner’s art elude them and exhaust their patience – but those ultra-sensitive noses give them an appreciation that goes way beyond any human oenophile’s. A smartdog will pay more for a good vintage than any human ever did; and the price paid for a bad bouquet might be the winemaker’s life.

Women: officially, they stick to their own kind, but in practice few bulls can resist the allure of the human female’s perpetual oestrus. These days, they meet with more resignation than resistance. Less like rape, more like droit du seigneur. The fruit of these couplings is harder to hide than the imperial bastards of earlier ages: but it scarcely matters because the rarely survive past weaning. If their mothers don’t kill their lycanthropic offspring, their fathers’ jealous bitches do.

At least smartdog song is harmless, if hard on human ears.

Of course, there is one more pursuit (what an apt word!) that the smartdogs enjoy: the thrill of the chase. Bread and circuses. But smartdogs don’t have much time for bread; they’re more interested in blood. No-one who’s ever witnessed the dogfights would kid themselves that it’s a fair fight, for all the blades and cudgels given “sportingly” to the humans. Nature gave the gladiator pitbulls superior strength and speed; we gave them the tenacity and smarts to use them to their fullest, most lethal effect.

So, like generations of the oppressed before us, we cannot hope to overcome them by brute force. Nor is strength of numbers on our side: the smartdog birthrate is a dozen times ours. Dogs are not good at forward planning, so we can take consolation from the fact that their lack of reproductive restraint is rapidly turning into to ecological catastrophe. Yes, resource shortages may put an end to their empire, just as they have so many others. But will any human still be alive to see that day? And what will we inherit if we do? A ruined, dung-encrusted wilderness?

No, my friends, if we are to take our planet back, we will need to play a different game. We still have skills and knowledge the dogs cannot comprehend. They understand flesh, not metal; they understand emotion, not logic. They destroy, not build. If we are careful, they won’t understand what we’re up to any more than they understand the work of the winemaker.

Of course, we can’t hope to elude detection: not when they can smell everywhere we’ve been and everything we’ve done. But we can stay one step of ahead of them, we stand a chance. That’s why I have given up my vintner’s nose: so that I can detect the taints that might give us away, so that I can anticipate the questions that might undo us. We will soon know if the surgery has been successful.

So I say to you now, comrades: Stand with me. Join me. Shed your fear of the old enemy in order to fight the new one. Work with me to rebuild the machines – the machines that can save us all.

As long as we secure their obedience this time. ##